This is probably the first post in my blog about a review/rating of a real product (apart from similar reviews like Virgin Mobile service and btrfs). Also, I would like to mention that Cooler Master fabricates excellent products and I have had good experience with them. However, my use of the Cooler Master Blade Master 92 CPU fan was not so successful.

The computer at hand contains an Intel Core 2 Quad Q6600 (running at 4x 2.4 GHz), it was built in late 2007. I didn’t give it many breaks, so it was pretty much running constantly since then, with a few exceptions (moving places, i.e. a period of a few hours, or building in new harddrives or a power supply, i.e. a period of a few minutes). The built in CPU fan also was from Cooler Master, however I could not find the model name (model no. was A9025-18RB-3BN-F1) when it started to make problems half a year ago (means it was working perfectly fine for 4.5 years with a few short breaks). 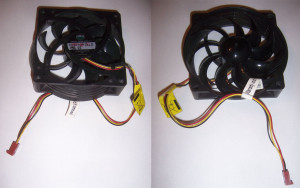 It did not completely stop spinning, but slowed down and made loud noises; so I decided I would exchange it.

Since I had made good experience with Cooler Master I was going for them again and picked a model similar: the Blade Master 92 (model no. A9225-28RB-4BP-F1). 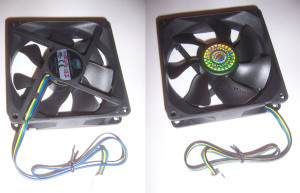 It was supposedly being silent (not super-silent, which is not a must) and had good reviews. Things went fine and it did its job. Until a few weeks ago. From time to time it got very loud and was spinning sort of bumpily. Without my doing it would stop that behavior after a few minutes (and start again at some time).

I don’t open up my case often, because usually there’s no need. Sometimes I would vacuum the inside (of course while the computer keeps running) and I even switched the fan without turning off the machine (it was a chore but possible).
It turns out the Blade Master 92 would gather up a lot of dust quickly, which probably has to do with the curved blades (inspect the above picture). The ball-bearing got involved (with the collected dust), which was most likely causing the bumpy ride and the noise. Although the computer has pretty much done a good job and will be taken our of service soon, I can conclude that this CPU fan is not suited for continuous 24/7 operation.