When you’re at the CeBIT, you’ll always find a few surprises. “Surprise” being something or someone unexpected.
Apart from seeing all sorts of new technical and technological innovations, I unexpectedly met a friend I knew from Munich. He is big in the Drupal community and was doing PR at the CeBIT this year.
We met on the exhibition grounds when it was already past day-time and people were meeting up for after-work get-togethers and parties, I decided to pay him a visit during opening hours on the next day. What I found was something so cool that I need to blog about it.

One of the folks from some open source CMS had the great idea to create a joint booth where many open source content management systems would exhibit their software, calling it the cms garden (their Website. I don’t really know whether the name results from the fact that a few “plants” would grow there (e.g. Magnolia CMS or papaya CMS) or whether it adopted the naming idea from projects like the css Zen Garden.
A total of 13 open source CMS software programs were being promoted, both for the public visitors but also for the exhibitors themselves, in order to get to know the other pieces of software. They don’t see each other as angry rivals but rather friendly competitors. It was a really nice atmosphere: 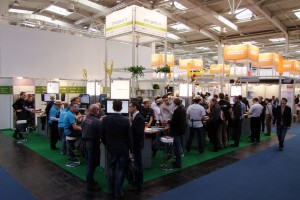 They published a booklet called “CMS Gardener’s Guide”, introducing and presenting the idea of especially open source CMS as well as each CMS separately with a short story. The booklet is really well done and provides a nice overview of the different CMS solutions with their features, advantages, histories and peculiarities. 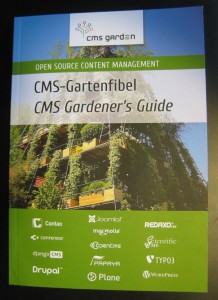 In the evening of my second day the Medialinx AG was throwing a party right next to the cms garden. Well, yeah, parties at the CeBIT after opening hours are partially for the public, but much more are they dedicated to all the exhibitors, who work hard during the day and deserve to get a break and enjoy their evening.
During that party I met the Drupal friend again and also got to know two folks from Plone and papaya. They agreed to publishing this following nice photo: a picture of three core people from friendly competing open source CMS, after an exhausting exhibition day. 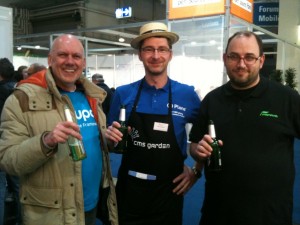 3 nice folks from different CMS at the cms garden

This is open source, this is cms garden, this is CeBIT, this is community.